"We are a school district of distinction!"

On the (insert date I am no longer sure of because I am really bad at updating this blog) we had a district wide assembly in our high school gym. Up until everybody was in the bleachers, no one really knew what was going on. The teachers had just been told to make sure that their students were present, and that second hour would start late. It was referred to as “The mystery assembly”. It turned out that the entire school district had been judged to be in the top 10 or 16 % (or something like that) of Colorado school districts. To be honest, I wasn't completely paying attention, there was a lot of people saying a lot of things, but the gist is that the all the teachers are really good at teaching, and the students are either clever or good at learning. One of the speakers made each school yell out “I am a student of distinction” the teachers had to yell “I am a teacher of distinction” and then finally everybody yelled “We are a school district of distinction”. This means that if you really wanna understand the effect of the ! In the title, imagine a gym full of kids from age 3 to 18 occupying all the seats on the bleachers and the floor screaming at the top of their lungs.

I must say that this distinction of our school doesn't really come as a surprise for me. At some point before the district assembly, we had an assembly for the school. We have had a couple of those so far, every time to honor the sports. This assembly was however for the academics. By the end of each quarter honor roll is announced. There is two different “levels”. The first is when you had a GPA (Grade Point Average) of 3 -3.4 and that is called honor roll. The second is called Honor distinction roll which is when you have a GPA between 3.5 and 4.0. About ¼ of the school was on the honor roll, and got called up to the stage to get their diploma. This seemed like a lot to me, but as it turned out, it was nothing. More than half the school was on the honor distinction roll, me included. I think that it's great that so many people have good grades (A 4.0 is straight
A's) but it seems like it kinda defeats the purpose of Distinction if most people get it.
If anyone is interested (Hello, mom, dad, grandma and granddad) my grades as I'm writing this are straight A's. Don't worry, event though I don't need the credits, I still care about my grades and do my schoolwork ;D 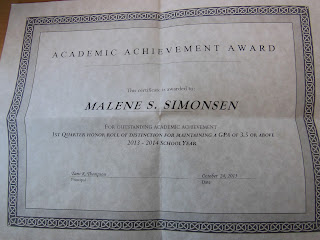